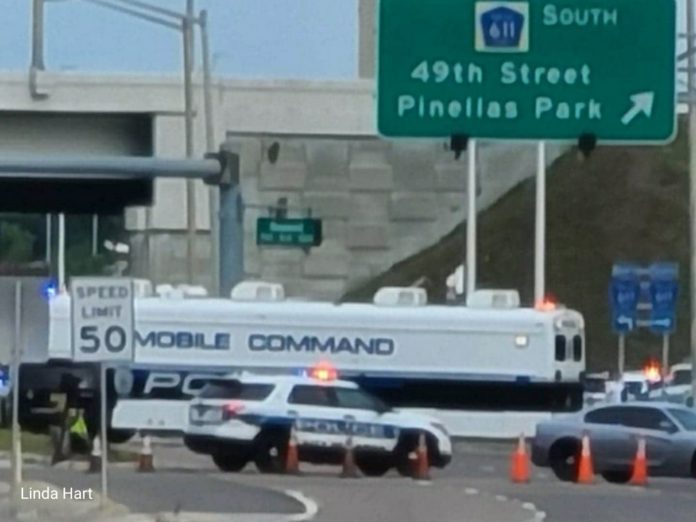 The Largo Police Department along with the Pinellas County Sheriff Office are currently on-scene of a officer involved shooting. The incident began after police were notified of a person with a weapon at the St. Pete Auto Auction at 14950 Roosevelt Blvd.

Officers en-route to the scene were notified that a white female subject was pointing a gun at people at the scene and that she fled the scene by running westbound on Roosevelt Blvd. toward 49th St.

At the intersection of Roosevelt and Frontage Rd, the female subject refused commands to drop her weapon and fired at the officers with a handgun. One of the bullets struck a Largo Police vehicle in the windshield. An exchange of gunfire took place as the woman was crouched behind a sign and light pole at the intersection.

The subject then ran southbound on Frontage Rd as officers followed her. She again fired shots at the officers. They returned fire, striking her multiple times. She was given first aid at the scene. The subject was transported to Northside Hospital in cardiac arrest and pronounced dead at the hospital.

The woman has been identified as 49 year-old Deborah White.

No citizens or officers were injured in the incident.

The Florida Department of Law Enforcement is investigating the shooting.

Road closures continued in the area for several hours around the area of 49th Street and Roosevelt Boulevard. The roadway was reopened at approximately 6 p.m.