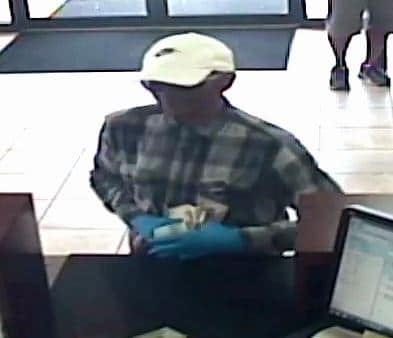 Detectives from the Pinellas County Sheriff’s Office are seeking the public’s assistance in locating a bank robbery suspect.

According to detectives, the suspect entered the Cadence Bank located at 36301 US Highway 19 North in Palm Harbor at approximately 12:40 p.m. on Friday, February 14, 2020.

Once inside the bank, the suspect approached the counter and handed the teller a note, however, no weapons were seen.

Detectives say the suspect left the bank after receiving an undisclosed amount of cash and fled northbound on foot.

The suspect was described as a male, unknown race, approximately 25 years old.

He was wearing constructions boots, blue colored gloves and may have been wearing make-up