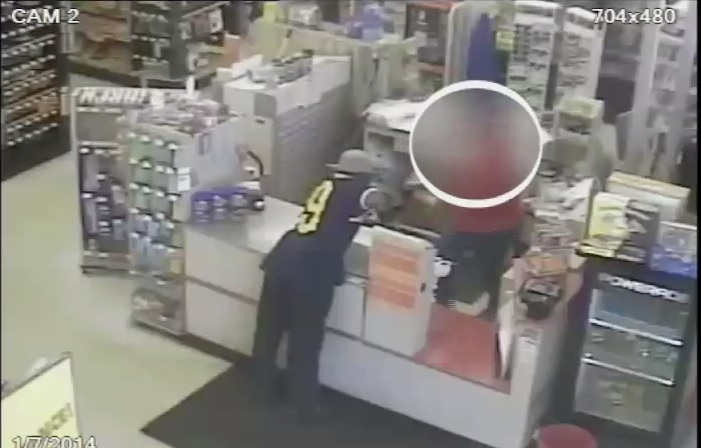 Clearwater Police are seeking the public’s help in identifying a man who has robbed two stores in three days – including one holdup in which he brandished a giant machete.

Robbery detectives released this surveillance video from both stores Wednesday morning in an attempt to elicit clues from the public.

“We’re extremely concerned about what might happen the next time,” said Police Chief Anthony Holloway. “The first time, he was satisfied with just the money.

The second time, he lunged at the clerk with the knife and cut her.

“His level of aggression is increasing,” the chief added. “That’s disturbing.

We need to find him and get him off the streets.”

The suspect entered the store and picked up a pack of razor blades. He then went to the counter to pay for them. When the clerk opened the cash drawer to conduct the transaction, the suspect drew a machete from his pants and held it in a threatening overhand grip. He took the cash and ran from the scene.

The machete was estimated to be between 12 and 18 inches long.

He entered the store and this time selected a bag of chips. He went to pay for the item and as the clerk opened the cash drawer, he pulled a knife from his pants pocket and lunged forward over the counter, striking the clerk in the hand with the knife. He ran from the store after getting cash from the clerk.

The knife had a long blade as well — perhaps 6 to 8 inches.

The clerk suffered minor injuries in the robbery.

The suspect is a black male, between 45 and 50 years old who is about 5 feet 8 inches tall and weighs 175 pounds. He wears wire-rim glasses and is unshaven or has a light goatee. He has a deep voice and decayed teeth. In the second robbery, he was wearing a unique blue shirt with a white collar with the No. 99 on the back.

Anyone with information on who the suspect might be should call Clearwater Police at 562-4242 or email tips@myclearwater.com
[mappress mapid=”124″]