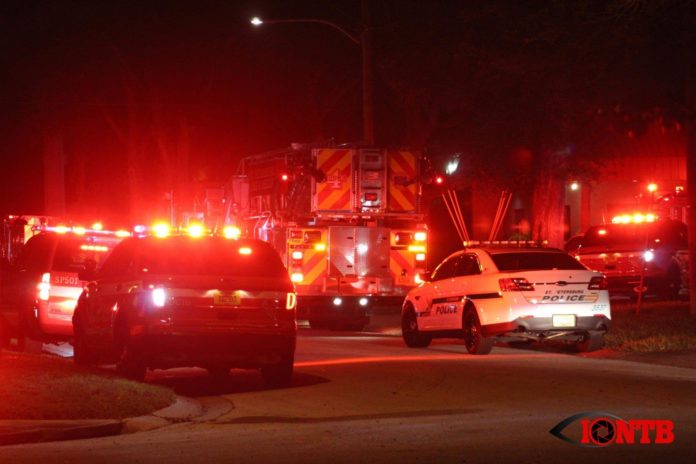 St. Petersburg Fire Rescue and Police responded to reports of a vehicle fire at approximately 8:40 p.m. on Thursday, October 10, 2019.

Arriving crews located a fire in a travel trailer in close proximity to the structure located at 2155 14th Circle N in St. Petersburg.

Due to the fire spreading to the nearby structure, additional fire units were requested. Firefighters were able to contain and extinguish the fire.

The fire occurred in the same industrial park as the Sunstar Paramedics St. Petersburg Hub. Paramedics did locate an individual near the scene with what appeared to be stab/cut wounds. The subject was transported, as a trauma alert, to Bayfront Health St. Petersburg.

According to court records, 43 year-old Bertram Mann was seen walking with two containers with “rags” hanging out of them. The victim smelled gasoline as the container was thrown at his trailer. The victim, while attempted to extinguish the fire, was repeatedly attacked with a hatchet. He experienced wounds to both his chest and back.

St. Petersburg Police along with the helicopter from the Pinellas County Sheriff’s Office began to search for Mann.

Based on various investigative techniques, officers were able to identify and arrest 43 year-old Bertram Mann of St. Petersburg. He was located about 1.1 miles from the scene.

Mann is facing charges of attempted first degree murder and arson. He was booked into the Pinellas County Jail early Friday morning.