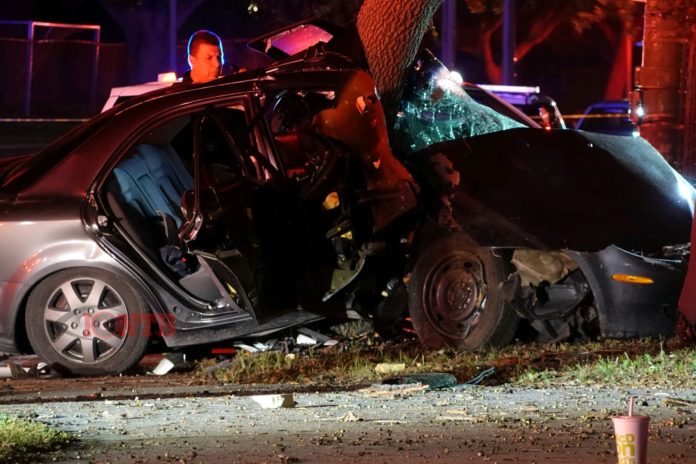 Officers from the St. Petersburg Police Department are currently investigating a crash that left one teen dead and four others injured.

The 16 year-old unlicensed driver, Isaiah Bostick, in a 2003 Mazda 6 was speeding and driving recklessly on 26th Avenue North at the time of the crash, according to investigators.

The vehicle hydroplaned just prior to impact with the oak tree. Some water remained in the roadway from the rain that occurred before the crash.

The driver was heavily entrapped in the vehicle which required an extended extrication process to free him. He was crushed and pinned by the dashboard of the vehicle.

A second 16 year-old occupant of the vehicle was transported to Bayfront Health St. Petersburg with injuries being categorized as critical.

Two other teen males in the vehicle, ages 16 and 17, were transported to the hospital by family members with minor injuries.

Detectives later discovered that a 14 year-old female was also an occupant in the vehicle.

Police say none of the teens in the car had a driver’s license.

On Tuesday, October 6, 2020, St. Petersburg Police reported that Isaiah Bostick died from his injuries the previous evening. They also reported that the four other teens were all recovering at home.

The investigation continues and any updates will be provided here on IONTB.com