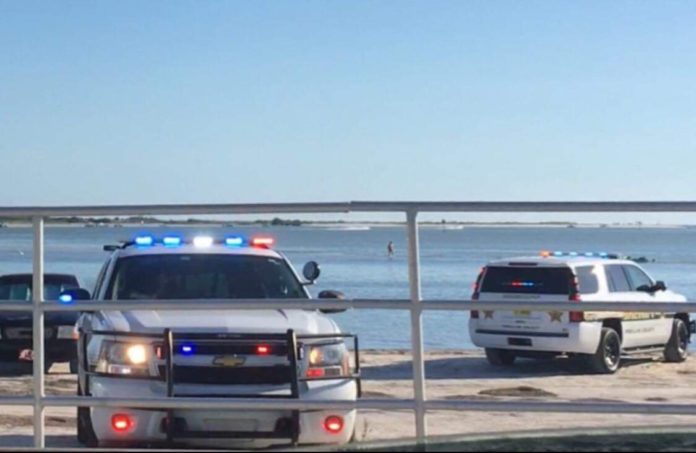 According to the Pinellas County Sheriff’s Office, at about 5:23 p.m. on Sunday, May 19, 2019, deputies were called to the Dunedin Causeway for a report of a stabbing.

The incident occurred on the Dunedin Causeway located at 62 Causeway Boulevard in Dunedin.

While deputies were responding to the causeway, they received information that the suspect left the causeway in a Ford F-150 truck.

While responding to the causeway, deputies located a truck leaving the area that matched the description of the suspect’s vehicle. Deputies initiated a traffic stop on the truck near the intersection of Tradewinds Drive and Bayshore Boulevard.

Deputies made contact with the driver of the truck, 41-year-old Javier Solis, and passenger, 48-year-old Lynette Kist.

Deputies on the causeway made contact with the victims, 54-year-old Dwayne Rouleau, and his step-son, 19-year-old Christopher Gourlay.

Paramedics on scene were treating Rouleau for multiple stab wounds.

Through the course of the investigation deputies learned that Solis and Kist were originally parked on the southwest causeway beach next to Rouleau and his family. Witnesses say at some point during the day, Solis and Kist had a verbal argument with Rouleau.

Deputies say Kist walked up behind Rouleau and placed him in a headlock.  Rouleau’s step-son Gourlay witnessed the battery and pulled Kist away from Rouleau.

Solis went to his truck and retrieved a knife before entering the affray. Solis tried pulling Kist out of the way during the affray and accidentally cut Kist with the knife.

Witnesses told deputies that Solis then stabbed Rouleau multiple times in the torso and then battered Gourlay with his fists.

Deputies say Solis and Kist then fled the scene in the Ford F-150 truck.

Deputies learned that prior to being stopped by deputies, Kist took the knife used in the stabbing and threw it out the passenger window of the truck into the intracoastal waterway.

Rouleau was transported to a Bayfront Health St. Petersburg for non-life-threatening injuries. Gourlay was treated at the scene for minor injuries.

Kist was transported to a Bayfront Health St. Petersburg for non-life threatening injuries.

Deputies arrested Solis and transported him to the Pinellas County Jail without incident.

Immediately after being released from the hospital, deputies arrested Kist and transported her to the Pinellas County Jail.