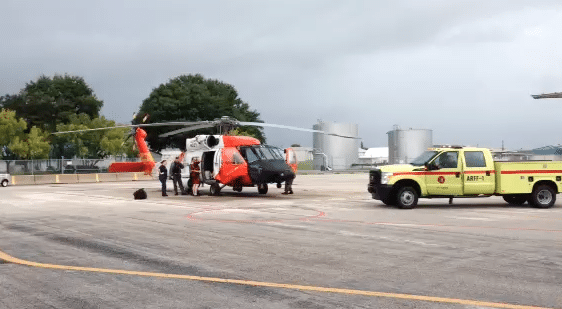 Watchstanders at the Coast Guard 7th District command center received a report of Reza Baluchi, a U.S. citizen, floating in an inflatable bubble Wednesday.  Baluchi was reportedly disoriented and asking for directions to Bermuda. The Coast Guard Cutter Webber arrived on scene, conveyed the dangers of his voyage and requested Baluchi terminate his trip due to the lack of supplies on board to sustain him.  On board, Baluchi had protein bars, bottled water, a GPS and a satellite phone.

Audio of discussion with Baluchi

USCG
After he refused to leave his vessel, the watchstanders continued to monitor his movements until he activated his Personal Locating Beacon (PLB) Saturday morning. Coast Guard HC-130 airplane and MH-60 helicopter crews out of Air Station Clearwater, Florida, were dispatched to Baluchi’s position along with the Maersk Montana, a vessel registered with the Automated Mutual Assistance Vessel Rescue System (AMVER).

Once the aircrews arrived on scene, a rescue swimmer from the Jayhawk crew safely hoisted Baluchi from his inflatable raft into the helicopter.  The MH-60 crew transported Baluchi to Air Station Clearwater where emergency medical services evaluated him.  The Airport Fire Rescue crews are located at the Clearwater St. Petersburg Airport.

There were no reports of any injuries.

Video from US Coast Guard