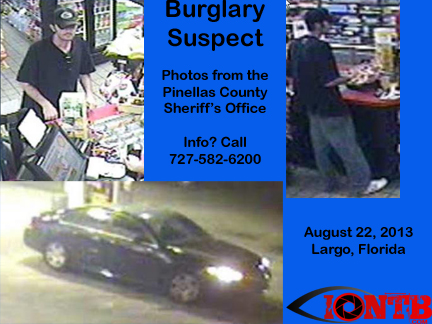 Detectives from the Pinellas County Sheriff’s Office are seeking help from the public to help identify a Largo burglary suspect. According to detectives, on Thursday, August 22, 2013 in the early morning hours the suspect entered the victim’s vehicle and stole a wallet.  The vehicle was unlocked at the time of the theft.

The suspect is described as a white male with dark hair.  He was last seen wearing a black shirt, jeans, a dark baseball cap and white tennis shoes.

Anyone with information on this theft is asked to contact Detective Ward Snyder of the Burglary/Pawn Unit at 727-582-6200 or to remain anonymous and be eligible for a reward contact Crime Stoppers at 1-800-873-TIPS or www.crimestoppersofpinellas.org