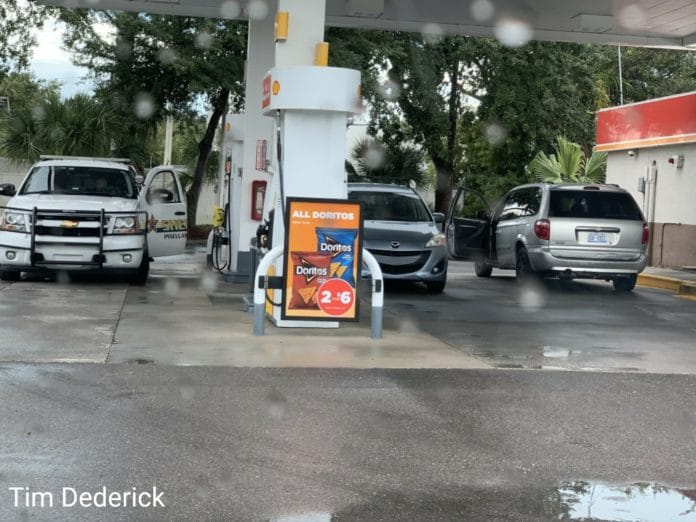 Pinellas deputies have arrested a man in Oldsmar who carjacked a victim, later demanded keys from customers and attempted another carjacking before being taken into custody.

Deputies responded at about 1:44 p.m. on Saturday, September 12, 2020 to a reported carjacking at a Circle K/Shell gas station, located at 3170 Tampa Road in Oldsmar.

According to deputies, at about 1:35 p.m. on Saturday, September 12, 2020, a 47-year-old woman was at the Oldsmar Circle K/Shell station, located at 3170 Tampa Road in Oldsmar, standing outside the passenger’s side of her Mazda 5 SUV pumping gas.

Deputies say during this time, 36-year-old Troy Johnson of Hickory, North Carolina, drove a mini-van into the gas station and parked next to the driver’s side of the Mazda SUV. Johnson exited his vehicle and entered the driver’s door of the SUV. Johnson, realizing the keys were not in the ignition, began demanding and threatening the woman to give him the keys to her car. She refused and retreated inside the business to call 911.

Deputies say Johnson fled the gas station on foot and entered the Panera Bread restaurant next-door at 3180 Tampa Road in Oldsmar. Johnson began pacing back and forth, yelling at the manager and the seven customers inside the restaurant that he was not leaving until someone gave him keys to a car. Johnson threatened the manager and eventually walked out of the business.

When deputies arrived on scene, Johnson was in the Panera Bread parking lot attempting to carjack a Ford Fusion, driven by a 36-year-old man. Johnson ran around the vehicle to avoid deputies and tried aggressively to open the door of the vehicle before fleeing eastbound on foot.

Deputies gave chase and deployed an electronic control weapon in an attempt to stop the fleeing suspect.

Johnson was immediately secured by deputies and provided medical attention by Oldsmar Fire Rescue. Johnson was found to be under the influence of narcotics and was transported to Mease Countryside Hospital.

No booking photo is available at this time.